After he is violently attacked in the street, Eddie wrongly identifies Ahmed, an ideal suspect whom he’d noticed a few days before the attack. While the legal machine gets underway with Ahmed, Eddie attempts to win back his wife and son through a new job. But Eddie soon becomes aware of the seriousness of his accusation and he’ll do anything to establish the truth, even if it means he risks losing everything.

Nicolas Duvauchelle was nominated for Best Actor at the 2017 César Awards and 2017 Lumière Awards for his performance in the film.

Finkiel incisively builds his lead characters, subtly developing relationships along with alienation, resentment and racism to paint a picture of an average Joe whose weaknesses are distressingly commonplace.

Join the French Cultural Center for their first Ciné-Club de l’Alliance of the fall as they screen the critically acclaimed thriller, Elle by Paul Verhoeven.

Isabelle Huppert puts in a Golden Globe worthy performance as Michèle Leblanc. Michèle seems indestructible. Head of a successful video game company, she brings the same ruthless attitude to her love life as to business. Being attacked in her home by an unknown assailant changes Michèle’s life forever. When she resolutely tracks the man down, they are both drawn into a curious and thrilling game-a game that may, at any moment, spiral out of control. 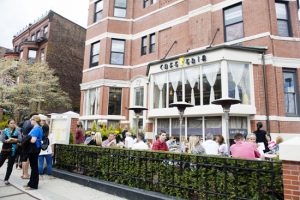 The Hottest Standup Comedy Showcase Comes to Cafeteria on Newbury

The last Wednesday of every month at Cafeteria features an unforgettable experience combining the most talented local and national comedians, including previous winners of the Boston Comedy Festival, acts that have been on Conan, Jimmy Kimmel, Late Night with Steven Colbert, Comedy Central, Sirius XM and more.

Not only is this show completely free – you can enjoy free drink samples from our sponsors* (that’s right – free alcohol!), $5 burgers, and a custom drink menu full of cocktails available exclusively during the show – if it seems too good to be true, Cafeteria invites you to come see for yourself

Doors open at 7pm, the show begins at 8pm – previous shows have packed to capacity, so while this event is not ticketed, we do recommend arriving early to reserve a seat.